Airborne Technologies has equipped two Rega helicopters, type AW109 SP, with the necessary mounts to assemble a WESCAM camera system on a moveable lifting device outside the helicopter, as well as the advanced operator workstation inside the cabin.

With the development of an external camera lift, mounted on the LH-side of the helicopter, ABT has eliminated one of the recurring problems in airborne surveillance: the impaired downward visibility due to the landing gear. Now, Rega’s WESCAM MX-15 in its extended position on the lift enables unobstructed 360° view.

The operator workstation provides real-time information displayed on two large 21’ monitors which support split-screen functions, infrared imagery and moving map information simultaneously. Additionally, these advanced features are controllable via an easy-to-use touchscreen, which has increased the situational awareness of the operator significantly.

Wolfgang Grumeth, CEO of Airborne Technologies, said: “Endurance and payload always matter. Most of the components used for the lifting system and the workstation are made of carbon fibre and are particularly lightweight. This helicopter is equipped with the most modern surveillance equipment which is optimal tailored to Rega’s special operations.” 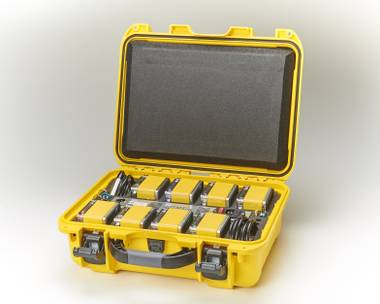 FEC Heliports’ Portable Battery Powered LED Helipad Lighting System is the most advanced on the market today. Designed for rapid deployment in temporary and emergency situations to provide safe landings and effective marking in a variety of conditions.